Peter got up really early for work and I had intended on getting up with him to say goodbye. When I woke up, Shannon had already left for school, and I missed both of them. I was upset to say the least. Susan prepared some breakfast for us while we collected our items and prepared to go. We said goodbye 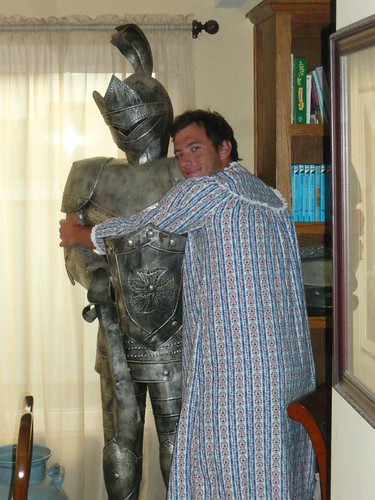 to Lancelot and were on our way… back to the coast.

Susan dropped us off on the 1 near Pepperdine on her way. We said our goodbyes, and I promised to return with Meghan sometime soon. We really had a great time with the west side Ceglarskis… clearly… we ended up spending 3 extra days with them than we intended. Back to life on the road… sort of.

From there Paul and I made a quick ride to Paul Beach, or as the locals call it, Muscle Beach. We played around on the gym stuff they have there for a while. 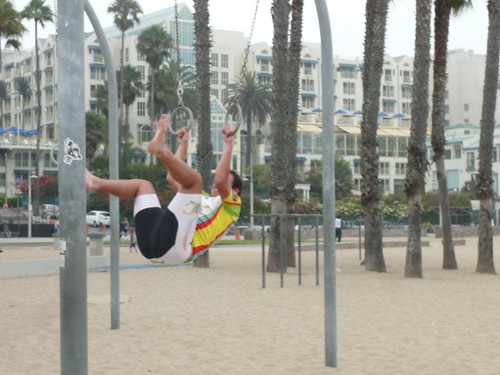 It was loads of fun, and equally as fun to watch the regulars do the rings. Paul did a pretty good job himself. 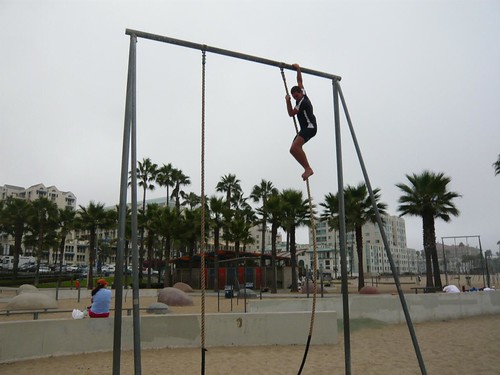 After hanging out on the beach for a few hours we left there with only another 15 miles or so to Redondo Beach, where we would be staying with the Lenglets, old friends of Paul's family. Nearly the entire way to Redondo was a beach path, so we pedaled slowly and enjoyed the scenery. 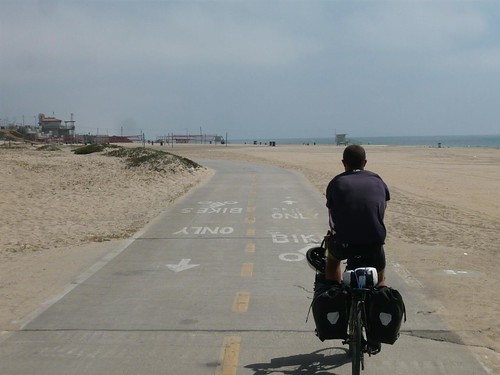 When we got close, I plugged the address into the ol' GPS. I made a slight error with the address which routed us inland. While we were riding, someone yelled to Paul that he had a flat tire. He looked down to inspect, mind you while we were going about 20mph, and didn't realize we were approaching a red light. Fortunately for him, he was directly behind me, and smashed into the back of my bike. We had gone unscathed for nearly the entire trip. I kept joking that he was trying to end it early. Amazingly neither of us fell, but the damage was done. He had broken a spoke of mine, and bent the rear rack that our bags sit on pretty badly. The rim would need fixing, but was ridable temporarily.

I then realized I put in the wrong address so we turned around and headed the right way. Turns out she was a few blocks off the ocean as opposed to a few miles inland. Much better. Miriam left a key for us to get in since we arrived before she was back from work. We let ourselves in and scared the crap out of their dog Shana. When Miriam (Mimi) returned Shana was much more relaxed and fun. Mimi was extremely nice form the get go. She insisted on making us dinner, but if we had plans we could do whatever we wanted. We found out that she had made us dinner on Sunday when we were supposed to come. We felt bad, but her daughter Danielle didn't mind.

We agreed to be fed, tough choice, but first order of business for me was fixing the bike. I went online and found a close bike shop. Paul and I headed down to the shop. I went in and talked to a guy who said it would be ready Friday around 2:00. It was Wednesday and we planned on going to Disney the following day, and leave Redondo on Friday. I was a little concerned they might delay, but what was I going to do?

After we left the shop, we kicked the soccer ball around on the beach for a while. After an hour or so I got a call from the bike shop saying my bike was ready. Great news. Out of the courtesy from trying to run me off the road, Paul paid for the relatively cheap repair. We got back on our bikes, and headed home for some dinner. 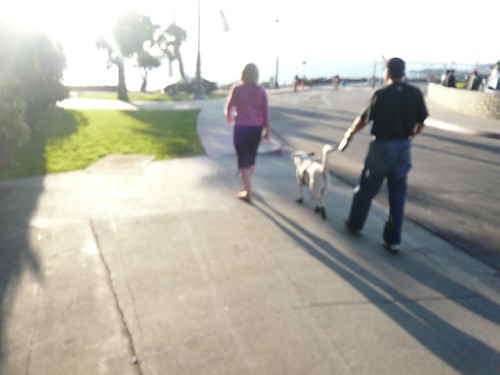 Wait… is that dog wearing shoes?

By then, Mimi's daughter Danielle was home. She is our age and is attending USC graduate school to become a professional writer. How exciting. Mimi's brother also lived with in the very large condo, with his wife Nina, and two sons. We all had a big family dinner plus us. The food was lovely. Thanks Mimi. Tony's son Tre thought we were pretty cool too 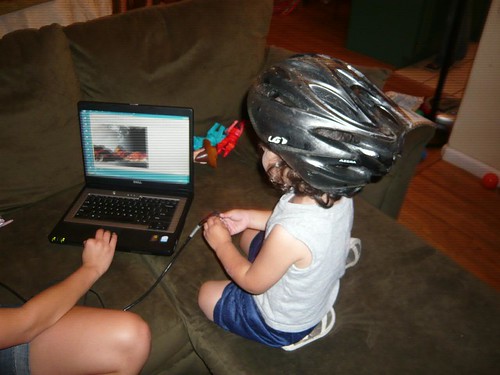 … so cool he wanted to wear Maverick's mask (although that term has become significantly less cool in recent times).   Sunset from inside the condo 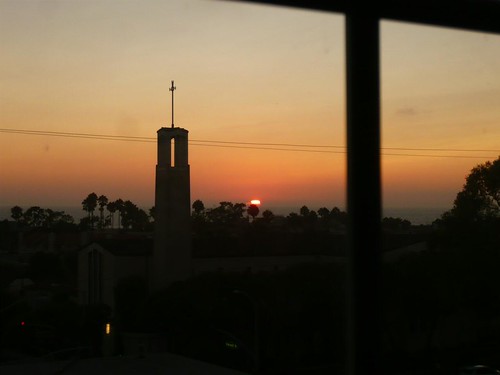 Danielle called some friends and decided she would take us out. A hot spot in their area is called Hermosa Beach. We rode right through it earlier in the day en route Redondo. We went bar hopping to a few different places, and ran into one of Danielle's friends that was celebrating a birthday. One highlight for me was playing old school Pacman at the last place we went to. Two player style. I emerged victorious, but it was likely due to my relative sobriety. To end the night, we went out on a long fishing pier at the end of the strip at Hermosa. It smelled a bit of fish guts, but was nice under the stars. 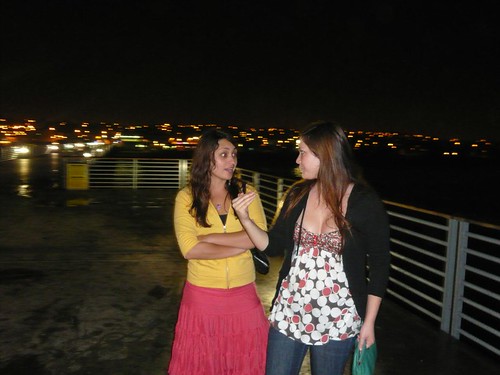 Paul, Danielle, Danielle's friend Tamara, and I all jumped in a cab and headed back to her house. Tamara decided to stay the night, so we planned on breakfast the next morning at a diner they both work at. They claimed the food was great, and we would get it cheap since they were an inside job. Worked for me.

Paul and I again got couches to lay our heads down on. It seems we went in streaks when it came to pampered sleeping vs. camping. Oh well, no complaints…. we had it good now. What a fun night.