When's the last time you were greeted in the morning to a crocodile leaping out of a lake near your tent, that you had to outrun to save your life? I bet never, right? Yeah me either, in fact that would be nearly impossible since crocodiles live in salt water and alligators in fresh.

So Paul woke up to more good news… another flat.. count it #5! We discovered another hole in his rear tube, which happened to be the same wheel as all his other issues. Becoming efficient at repair jobs, Paul and I were on the road shortly after the discovery.

With no food on us, we'd have to make it about 20 miles for breakfast. We made it to a small place, the only thing in miles in either direction, and had to settle for lunch sandwiches. We bought a gallon of fruit punch too, but also water as to not repeat the sweet tea episode of day 10 Liberty road was shortly after this.  A scenic ascent into the highest altitude we had pedaled yet, liberty road brought us into the historic town of Natchez, Mississippi. This was the first settled town on the Mississippi river.

Right before we entered Natchez we crossed a 20-30 foot bridge over a small stream. While looking at my gps I said, we just crossed the Mississippi. I had been planning it for about 20 miles, since I knew he'd buy it, and he did. He'd soon see the silliness of his gullibility (that's a word?).

When arriving in Natchez, first order of business was to pick up some spare tubes to replace the stash Paul had depleted. Check. Next was to feed ourselves. Natchez proved to be a charming small town, with a cool little main street area. 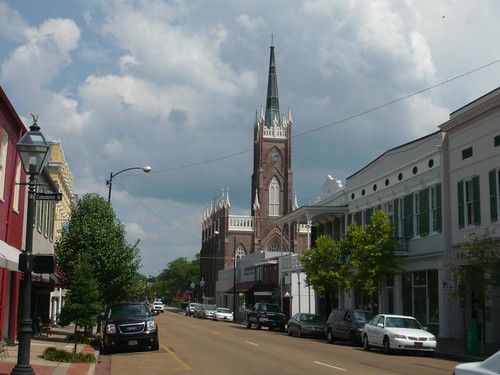 We ate at another buffet place about to close called Vaughn's. They had some more delicious food, especially this sweet corn / potato mix. As an interesting young girl approached the door, the waitress warned us that she was autistic and would come talk to us. Shortly thereafter Anne had invited herself to sit down with us while we were both eating. We of course obliged, and proceeded to have a half hour conversation about music and video games. Anne especially likes the music of video games, something to which a fellow nerd could certainly relate. Anne really enjoyed our company, and asked for a hug before we left. 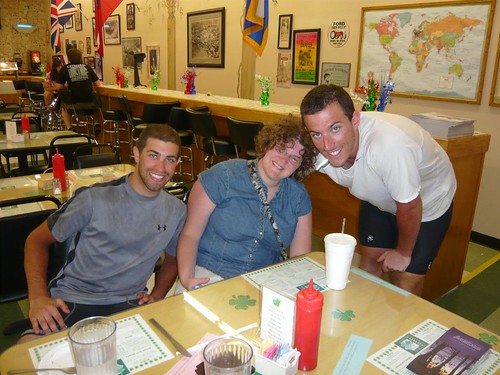 At that point we also noticed a map with pushpins for people to place for their hometown. Paul and I added our Connecticutian pins and left town heading for the real Mississippi.

Crossing the mighty Mississippi was quick, fun, and humbling… and educational for Paul. 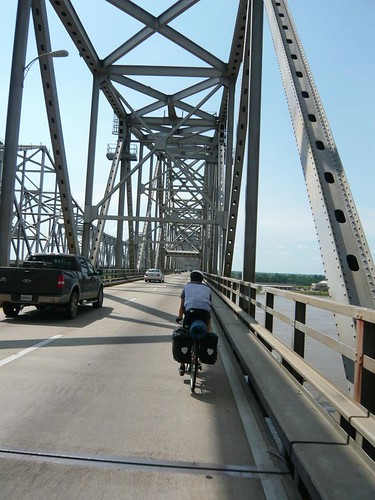 We needed to get biking maps available at the tourists center in Vidalia, on the Louisiana side of the Mississippi, to help us navigate the remainder of Louisiana. As luck would have it, it was closed. We'd have to use the regular map we had and take some good guesses.

So we headed west, feeling a little down on our luck. Things would turn for the worse, however; Paul got his 6th flat on a nail. What luck! I felt bad for him as I ate his Snickers watching him replace his tube. Yum… oh yeah, Paul was fine.

Google said there were no motels or campgrounds as far as we wanted to go so we thought we might be camping in the closest wooded area. Paul had faith in "the homeland", and that Google was wrong, so we headed to a small town called Sicily Island.

Once there we spoke to someone who suggested that maybe it wasn't the safest area to pitch a tent. Our only lodging option would be Winnsboro, another 23 miles up the road. Well, what else could we do? As the sun descended ever closer to the horizon, we pedaled as fast as we could towards Winnsboro. Averaging around 18 mph, we made it there in an hour and 15 minutes. As we saw the city signs we shouted in triumph as a wave of success had surged over us. We were all set. Or were we?

Just so happens that there was some sort of rifle show going on in town (of course there was) and the two motels I called were completely booked. The third of the three in town had a room for us. Phew. Right next door to the motel was a place still open calleld Bobby's family diner. The food was very good, and the banana milkshakes were dynamite.

Bellies full, showers, and a nice place to sleep, we rested easy.