I woke up at 7:00 to some slight rain coming in so I quickly put on the rain cover. It was so cold and dreary that I ended up going back to sleep for a bit. After waking, Paul and I packed up and headed down the street about a mile to a breakfast place. It was fairly busy, and the service was pretty slow. By the time we got out of there it was nearly noon. Slow start.

It was a bit cold when we left so we had the jackets on. After warming up from riding for a while, we both shed our rain gear (big mistake) and packed it in the bike. Shortly after this brilliant decision the rain started, but it started as mist. It wasn't enough to stop and put the jackets on so we kept riding. After a while, a good amount of water had accumulated on our bodies, and it was too late. Then the rain picked up and never stopped. We were able to ride about 30 miles soaked to the bone.

We stopped at a small casino, which we have been seeing all over since maybe Wyoming. They had a restaurant, and we were both hungry and in need of a dry place to stay for a while. We both asked for hot waters, and each got a hot chocolate. I got a plate of fettucini Alfredo, and we also got a massive brownie and ice cream dessert. It was very good, and we even got refills on our hot chocolates.

It was just what the doctor ordered, but made for a difficult time getting back on the bike. Once we finally built up the courage, we left the jackets on this time. Wow what a difference. I tucked my hood under my helmet like my partner Ali "“ G 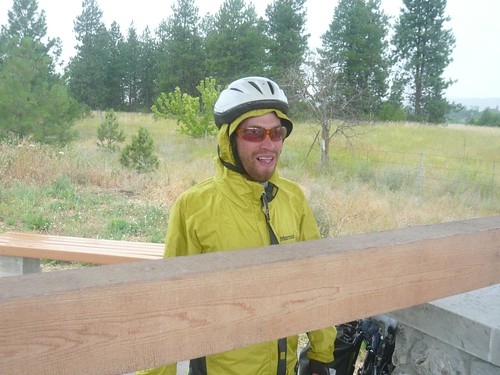 does from time to time and I was set. The pants and jacket make all the difference in the world.

We were traveling down the east 101 (it splits in Washington around the Olympics) and had to make it to the west 101 which rode closer to the coast. My directional senses kicked in and I stopped us on the 101. I mentioned to Paul that I thought we had to turn, so we pulled off the exit and checked the closest convenience store for a map. We made a sharp turn off the exit and Paul actually slipped on a paint line. He was able to clip out and put a foot down while saving his bike with his hand. It was a pretty smooth move, and there were tons of spectators to watch.

Once in the store, I quickly looked through a map and discovered that this was the turn we needed to take and we'd be on our way. The owner of the store asked me if I planned to buy the map, and that they were for sale (suggesting put it down or purchase it). I retorted that I was aware and kept on looking. Grumpy expletive. We were apparently too far west for Western hospitality.

We left there and continued on for a total of a 43 mile trip form the casino to a stop in Montesano. Dry and comfortable, although the rain never let up, we pulled into a subway for some food. We got to talking to the Subway faithful, and I did a little bragging about the proud point in my life as a Subway employee, a.k.a. certified sandwich artist. I was able to get wireless while in Subway, and posted a blog while we were there. We asked a few cops if there was any place local to camp, and there was right on the other side of the river from where we were. Backtracking is hardly ever an option for us.

We decided to keep on our path to where 108 (which we were on) met back up with the 101. As we approached the intersection, we noticed a few houses with their lights still on. We considered asking them if we could pitch a tent in their yard, but we continued on to the intersection which was actually a park and ride sort of carpool area. There was another camper there, so we decided to pitch the tent on a patch of grass off to the side. 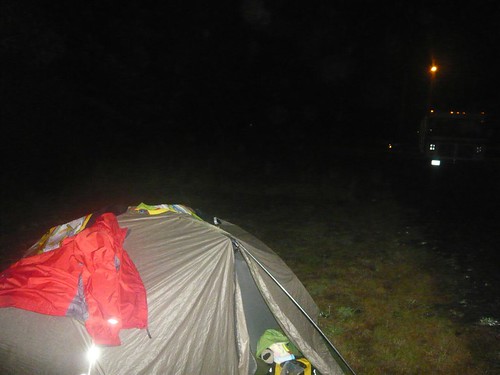 As we were setting up, a man came out of the camper and we began chatting with him. He was from Scotland and his group was meeting some folks in Seattle in a few weeks and was doing some touring before then. He offered us some tea, to which we agreed and he climbed back into the camper for a while.

While he was doing this, a hippy looking van rolled in with 5 people in it. The group was from British Columbia (that's Canada for people about to look that up), and they were certainly a jovial bunch. They offered us beer, and told us how everything is cheaper in the states, so it was basically free for them. While the Canadians were setting up, the Scotties fellow came out with some tea for us and a Twix. He was more of a quiet fellow and seemed a bit overwhelmed by the Canadian presence, so he went back inside. We were appreciative of the tea and treat.

I pumped up the soccerball (that's not one word? I'm getting a red squiggly line) and Paul and I went and juggled under a light on the 101, while the Canadians cooked up some dinner. We played for a while, stopping when the occasional logging truck pulled through, and picking back up right after it left.

We returned to the little fire they had made to cook their meat for some warmth. They offered us some soup that they had leftover, and I finished it off. They shared some funny border hopping stories with us as they had been to the states a bunch of times, and were heading back to California this time. They were even singing the same Biggy song Paul and I were talking about (I'm going going, back back, to Cali Cali). Mom and Dad, you must know this one. The most amazing thing I heard from them was that they found Americans to be really amazingly nice and helpful in general. If only that were the diplomatic view globally… it was funny to have heard since the opposite is usually what is told.

After a while of chatting, we all retired as it was after midnight and they planned on making it to San Francisco, or something ridiculously far compared to what one could possibly do on a bicycle. Tear. We were glad that we chose this spot to sleep. More interesting folks, and we were the minority as American citizens. Cool.

Tomorrow would bring a new state, Oregon, and the next day would bring rest but more importantly, Meghan!