When we got up, we had some cereal, a rarity on the trip. We owed Russ tons of milk as we had nearly devoured the two gallons that were there when we arrived. Russ had planned to show us around Boulder a bit, so we got ready and jumped in his car, no bike's for the day.

Russ took us up the flat irons, the mountains on the west side of town that have these faces that look like old school irons (like the piece in Monopoly). It was a very windy drive up to the top rising a few thousand feet. We passed a few crazy bikers on the way who were climbing it for a nice day of rest as it was Sunday. Fun. The views from the top were amazing. 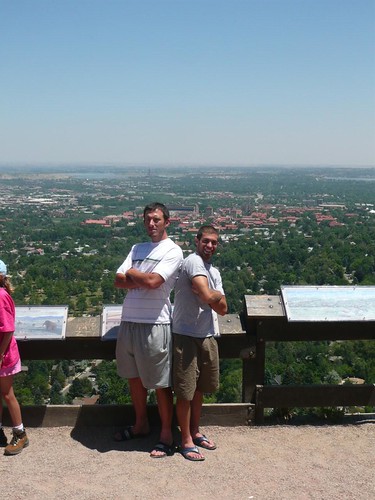 We could see Denver from where we were. Once we got to the top, we met some people who were planning there wedding. One of the couple's mother (awkward sounding?) positioned us around the seating area to get a feel of what it would be like with people sitting there. One of Russ's friends had actually been married there the year prior. Very cool place.

Once hunger, started taking over, we headed back down the mountains to town. Russ took us to this pizza by the slice place. They had delivery via bicycle, which was cool, and the slices were massive and good. The Euro Cup final was on the tv, Spain vs. Germany. When there was a brief break in the action we headed back to Russ's to finish it.

Once the Spaniards prevailed for the first time in 40 some odd years, we were headed out to go tubing. We had to pick up some tubes at Russ's friends Garret and Jake's house. They had 4 tubes, 3 nice ones, and one spare tire looking one. We weren't really sure what we had gotten ourselves into, but it was a beautiful day so why not be on the water.

A quick 3 minute drive from their house, and we were there. The tubing area was a nice little rapid section of a river that ran through town. It was littered with hundreds of people as spectators, tubers, kayakers, and rafters were all out having a good time. There were also tons of dogs of all different kinds getting sticks and just enjoying the cold water. It was very entertaining (to me especially for those who know how much I enjoy dogs) watching them have a blast.

Paul and I were definitely the rookies in the bunch. We had a difficult time traversing the river as the currents were so strong. As the water was snowmelt, it was quite cold, but felt very nice with the strong shining sun. I was a bit acclimated to it, as I mentioned before, I had been swimming in the Long Island Sound over the winter. Paul… not so much. He tried to stay as dry as possible.

As we all prepared to get in, Chris got the short straw. Ending up with the tire tube, I swore under my breath and we headed for the "initiation" as they called it, a huge rapid near the top. The whole ride down was great. I managed quite well with the tire tube, as I sunk nice and low in it. People were flipping left and right, including all of the pros that we were with. I was quite proud of my performance, as I always am regardless of the outcome.

As I entered the last rapid that we would ride into, some guys on the side told me to move to the left. I sort of thought they were joking with me and trying to get me to flip, so I somewhat took their advice. It was a fairly violent rapid. As I got down into it and stayed up, I cheered and the same people who had warned me yelled "No, you're not done!". Before I knew it I was sucked out of the tube, which didn't go anywhere, while I flew down deep into the water and got a nice raspberry on my backside. It was a bit scary, as I resurfaced about 20 feet downstream after being tossed around for maybe 7 seconds. Exhilaration.

After that experience, I was ready to be a full time spectator. Sitting in the sun, and letting it burn off the cold water while I reveled in other's misfortunes was a nice reward to end our tubing excursion.

After tubing we headed back to Russ's with plans to go back to Jake's and Garret's for a barbecue. Russ and Paul showered up, and I of course had already gotten mine in the river so I was set to go.

We headed back to Jake's and Garret's. They cooked up some brats and burgers that were very good. After we ate we put on Top Gun. I had commented on it earlier as I was perusing their DVD collection, and was happy it was going on. One of the girls had never seen it, and Jake was a pretty hardcore fan (he watched a 6 hour documentary on it), so we had to watch it.

After the movie we headed back to Russ's. We crashed again on his comfortable couches in his tv room. We had plans to play soccer the following day, I couldn't wait. Another day off the bikes in beautiful Boulder. We were having a blast there; it was our favorite spot so far on the tour.