Excited to be home, I woke at 3:50 and couldn't sleep. After absorbing jesting ridicule and mockery from me on the subject, Mark would later suggest that maybe there was some energy at the vortex in Sedona and that it was the reason for my early rise. There may have been other reasons, but it's best to keep an open mind. At any rate, I made it down to the lobby well before breakfast, which made the lobby guy a bit uneasy. They had a TV and I watched news about the 6th worst day in stock market history while I wrote on my laptop.

When breakfast time rolled around, I had first pick at the wide assortment of two different kinds of muffins they had. Yum.

I returned to the room around 7:00 and roused the troops. We gathered our stuff, and headed out for the last time. They picked up some food as we checked out of the hotel, and we were off. Paul wanted to get a shirt to wear since most of his clothes were ruined, and Mark needed a coffee so we stopped on our way out of town. It only took Paul about half an hour to choose a t-shirt to wear. It was then that I realized that the shorts I got for the trip, were still drying outside at the hotel. It wasn't far to turn back for them, but they were all but completely stained and destroyed anyway, so I scrapped them. Goodbye still somewhat gray generic shorts, you have served me well. I will cherish the times we shared. After the mourning, we got back in the car, and were off to Phoenix.

We arrived in less than two hours with hardly any traffic of significance. When we dropped off the car, I made sure we got a final picture. 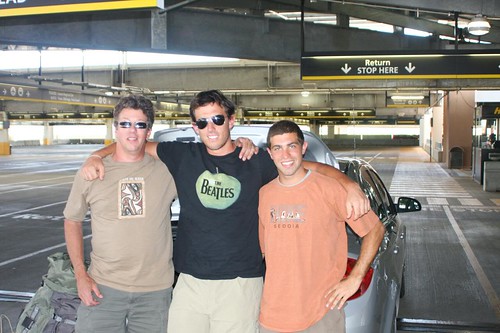 When we walked out to our terminals, I had to take a separate tram so I said goodbye to my brothers. For Mark, it wasn't so weird, I hadn't seen him in a while, and I would see him again in a week. For Paul, the person I had spent nearly every waking moment with for the last 4 months exactly, it was a bit odd to say the least. I would see him again soon as well, but I'm sure for a while things would feel a little different. Mark and I were returning home, while Paul was visiting a friend in Salt Lake City before he made the eventual re-entry.

When I got on my tram I began speaking with a woman who was also flying to Salt Lake City. We got to talking, and guess where her husband was from. Monroe, CT, the same place Paul is from. What are the chances? It never ceases to amaze me.

I arrived in my terminal with plenty of extra time, and was able to upload the last of the photos on my camera. The trip was over and I, a changed man for sure, was flying home to see family and friends for the first time in months.

And so the journey ends….

p.s. Maybe some trip stats and whatnot to come.