Mark and I got up at 6:00 to make it down the road to the Bright Angel Lodge. We had placed ourselves on a waiting list for the Phantom Ranch, which is a hotel on the canyon floor. Mark felt the need to, and I quote, "freshen up" before we left, so we used the bathroom. When we got over to the Bright Angel Lodge, it was approaching 6:30, which was when they started calling names on the waiting list. We didn't park in the right spot, and weren't quite sure of its location so we got out to look around. Time was ticking, so we split up. I assume we both figured out where it was about the same time, and we both ended up running. I heard my name called from right outside the door as I barged into the room. It was destiny!! Or not… they only had one vacancy, meaning like one cot. Damn.

We had missed one opportunity, but our other option would be to camp in the canyon. The back country camping place didn't open until 8:00, so we got some breakfast in the meantime. We also both got our first glimpse of the canyon. What a magnificent hole! It was truly majestic, and can never be expressed in words.

After breakfast, Mark drove over to the back country permit place and I walked. He beat me there, and I knew when I walked in that things weren't looking good. There was a large line and people had numbers well ahead of us. It turned out that there were no additional permits going out for that day, let alone the 13 we would have needed to be included. We were S.O.L.

We hastily headed back to the campsite as we would need to do all of the hiking in one day. To trump that thought, I came up with the brilliant idea of "stealth camping", (not sure if I used that term before) or camping where you're not supposed to, in the canyon. Paul was still sleeping off an illness he seemed to have picked up in the prior few days, but it was not a democratic descion; he was in. Mark was hesitant to the idea at best, but nevertheless, we packed all we would need to do such a thing, and headed out. We would need food that would last us two days, as the only way to get food in the canyon is through a reservation at the Phantom Ranch. We stopped at the market that was closed the night before and stocked up on all sorts of Clif bars and trail mixes.

We renewed our campsite in case it didn't work out, and so we had a place to keep the car, and we got in the bus to head over to the Bright Angel trail. We chose it because it had water, and would take us all the way down. Due to delays with the bus, and all the stuff we tried to do in the morning, we didn't start until about 10:00. It was Paul's first time seeing the Grand Canyon as we began our hike down. 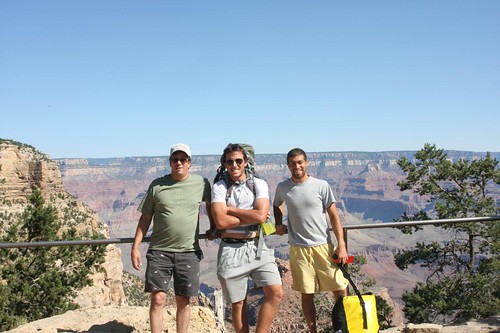 By the way, the always prepared Paul was wearing sandals.

The tour guide told us the first 1.5 miles of hiking is the vertical difference of the Sears Tower. It didn't seem that bad, as we all felt good at our first rest stop 1.5 miles in. By the time we got to our next stop however, 3 miles in, Mark was feeling sick. He took some pictures of me 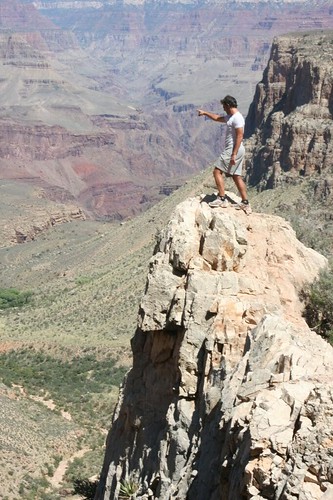 and decided he couldn't go any farther. Stealth camping was off. Damnit.

After a bit of deliberation, Paul and I decided that we would snag the camera and hike down to Plateau Point, a spot 6 miles into the canyon. We agreed, and went our separate ways. Knowing we would return, and the fact that no one would want to carry extra weight, I left all of our stuff, minus the camera, in the 3 mile rest station. Good move.

With no weight, and Paul in his sandals, we virtually flew down the path to the next few stops. Along the way we saw the donkey riders 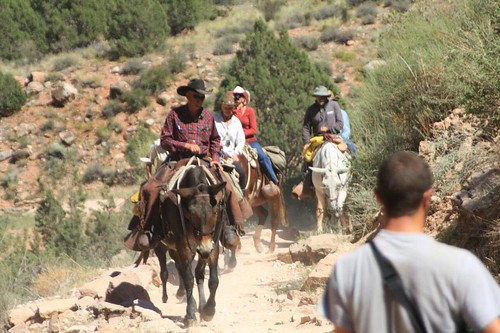 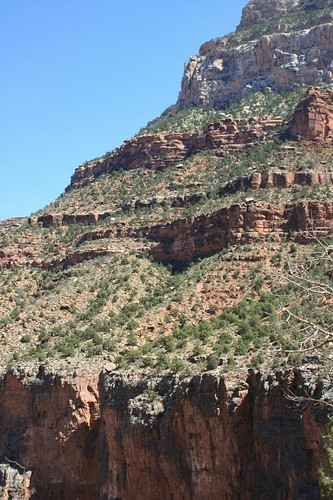 , and the Colorado River, which we hadn't seen yet. 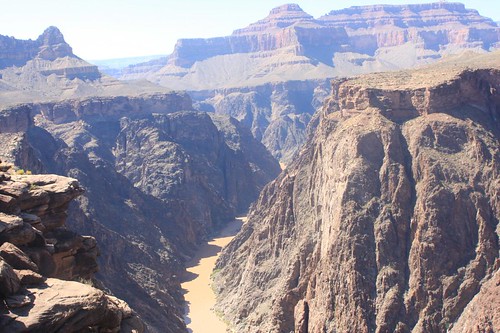 When we got down to Plateau point, we met a stoner who was waiting about 5 hours to watch the sunset, and asked us if we were doing the same. Probably not buddy. I did one of my favorite poses of the trip { 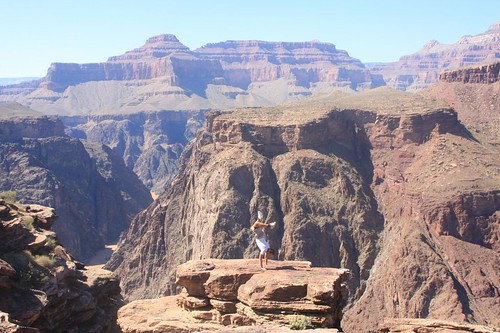 , and we hung out for a while enjoying the views. 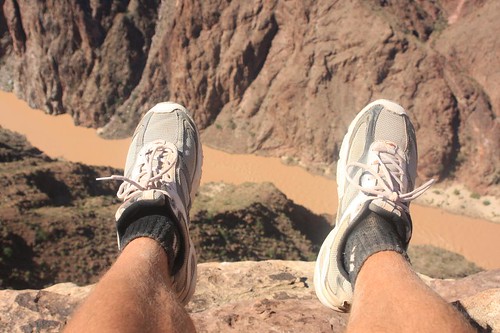 Time was not on our side however, and the sun went down shortly after 6:00, so we quickly headed back up the canyon.

We stopped to pick up the bag in the 3 mile marker and noticed a rather tame fury friend. Have you ever seen a squirrel so tame? 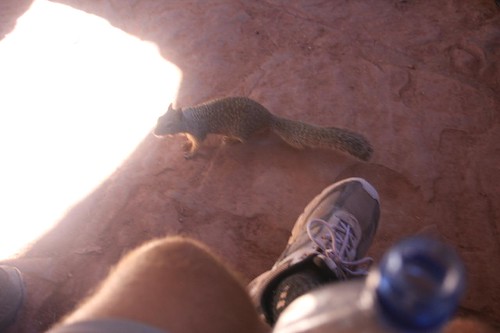 The rest of the walk up was pretty quick, and quit similar to the walk down. We had fun looking ahead for people and trying to catch up to them. Another memorable thing was the amount of donkey (I hope) waste 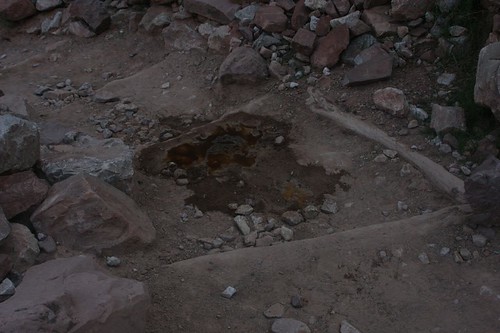 , and the lovely aroma that came with it. Yummy.

We marched out of the top of the canyon 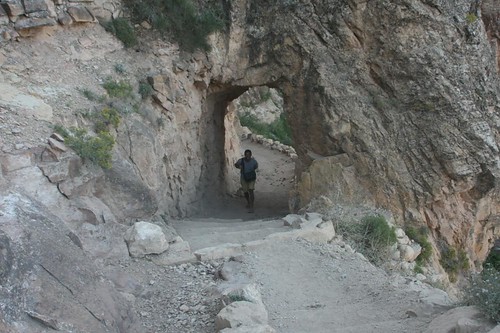 with time to spare. We were quite sweaty, and fairly tired though. It was nice to see the bus stop, and we parked it on the benches, and waited for it to arrive. The bus came and quickly dropped us back off at the campground. Mark had gotten back in his sleeping bag and was resting when we got back. He was not feeling too hot at all. On the contrary, when I felt his head, it was burning up. On the contrary, it wasn't literally burning, but merely above average in temperature.

We set up the tent for Mark to get in as he wasn't going anywhere. Paul and I went to go get food at the deli in the market, and Mark asked for some Tylenol. We went to the market, and got some food. It was good. Then we perused the gift shops for a while. I ended up getting a 24 pack of postcards to send to all the people we had brought us into their homes. I didn't do the exact counting on the spot, but figured to play it safe. When I got home, and eventually filled them all out, it turned out not to be enough. Crazy isn't it? Anyway, we also got some wood and a lighter to build a fire.

When we returned we began building the fire. I was only able to find a big bottle of Tylenol, so I didn't get it. Mark really needed though, so I went back and picked just that up. He popped the Tylenol and was out again. Yikes, and I have to sleep in the tent with these two sickos.

When we got the fire to a good blaze, we played burn the receipt game. Paul's wallet was about as thick as a Christmas Ham, and it sure as shit wasn't from money, as he ran out I think in Florida. For some reason, he had stock piled receipts from much of the trip. We spent a long time going through them one by one remembering where we were and what we were doing. It was a warm, reflective moment around the campfire that gave us some laughs, and maybe even a tear (…what, Paul… not me obviously). The farthest back receipt he had saved was from a motel in Louisiana. Ha, how lame… back in our motel days.

After that we let our limited supply of wood burn down, and we went to bed. Mark must have been having a dream he was a chainsaw, because he was doing a hell of an impersonation in his sleep. He also conveniently turned our tight 3 man tent, into a one person dictatorship all while we were sitting around the fire. Oh well, no worries, the poor guy needed some R and R to get back to an enjoyable vacation. I really felt bad for him, and hoped that the next day would be a more enjoyable one.

I must say that the Grand Canyon is everything it's cracked up to be and more. I wasn't able to do it this trip, but I do plan to do a rim to rim hike and stay in the Phantom Ranch at some point, to get the full effect of the grandeur that is the Grand Canyon. But for the present, I was quite happy with what we had seen and done. 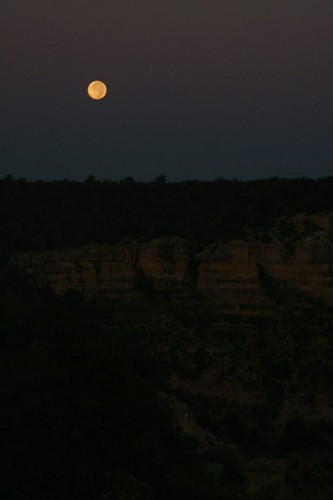