We got up early so that we were ready for Kelly. Paul told me he woke up earlier, at about 2:00 when Saul was pumping his tire in our room. Somehow I didn't wake up, but found it funny that Paul did. This guy was an avid biker. Good for him. I did wake up a little before 5:00 when a friend on the east coast was not sensitive to the time difference, and gave a call on the way to work. Sometimes Connor can be a little absent minded.

We ate the remaining cereal, and packed up our few remaining goods. Kelly called (thank god), and arrived to pick us up a few minutes later. Paul informed me that apparently Kelly was an attractive woman. I took him for his word, since I clearly did not have an opinion.

I smoothed over the "axe murder" situation quickly, and she told me that she tried to text back, and thought it was funny. Quite the relief.

I sat in the back before our first stop because I figured Paul the aggressive guy that he is, would probably be hitting on her. Within minutes, we were already in the desert. It would have been a pretty tough ride, as the temperature soared well into the 90's, and the hills leaving San Diego were not pleasant. I think we made the right choice.

After about two hours into the trip, we were approaching Arizona. We stopped very briefly at a rest stop where we got water, and used the bathrooms. When we got back in, I sat up front. I saw a sign for Dateland, AZ with "world famous" (yeah, I'm sure) milkshakes. It seemed like a good place to stop for hunger, time, and gas purposes. As we approached Arizona, we dipped down close enough to Mexico to see the border fence, a stark black wall amidst rolling sandy desert. 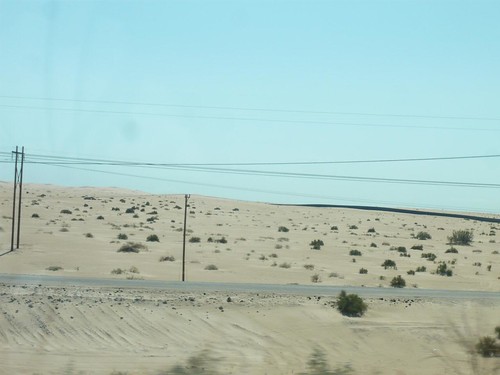 We crossed a bridge, and entered "The Grand Canyon State" 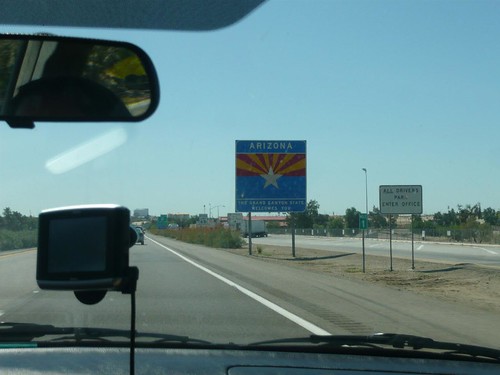 , my last state before returning home. Dateland was another 45 minutes over the border. It was a lot of the same stuff… desert.

When we got there, it basically consisted of this one restaurant and a gas station. All we needed. We ate our food, while reading these books that were sold at the restaurant that were intended to be comedy. I think it was a local author, and remember how unfunny they were. It was really bad. However, after the meal, it was desert dessert time. You like how I did that? They had traditional milkshakes, as well as prickly pear cactus shake, and I believe a pomegranate-date shake. Both were good, and although I may have liked a vanilla better, I figured when in Rome… and got the prickly pear cactus shake. Yum.

We left Dateland with about two hours to left to Scottsdale, right outside of Phoenix. Mark would be arriving in Phoenix around midnight, and us about 3:00 in the afternoon. With all the extra time, Kelly invited us to hang out with her at the Hyatt, the hotel at which she was considering working. Sounds like a plan. Kelly had lived in San Diego for a while and was working at a Hyatt there, and was thinking about moving. She had lived in many places throughout the states, but had never been to Phoenix. Oddly enough, Kelly was originally from Falmouth, Mass on the Cape, a place where Meghan has family, and I had been to in the last year or so. Nifty, I'm not going to say small word again…. …. ….. tiny world?

When we arrived at the hotel, we were in awe. I think the best word to describe it would be ballin' (I can't wait to look back at this 20 years from now and realize how stupid that sounds). It had a massive pool that wrapped around much of the backside of the hotel. 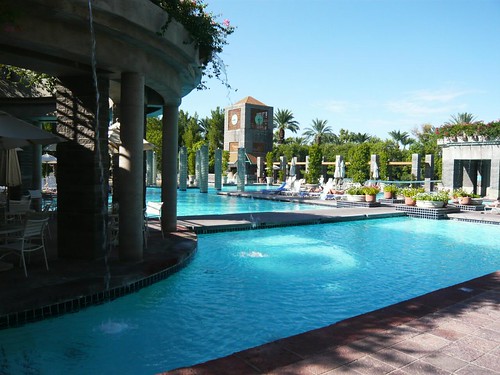 The pool had a beach section where the floor was filled with sand. There were several hot tubs. It was incredible. We dropped our stuff in her room and went down the pool.

When we settled up, Kelly only asked for $20 between the two of us. She assured me that it was fine, so I didn't fit it. For most of the rest of the day we hung out by the pool, oh yeah that I forgot to mention had a water slide too! We had a few drinks, and relaxed in the beautiful Arizona air. 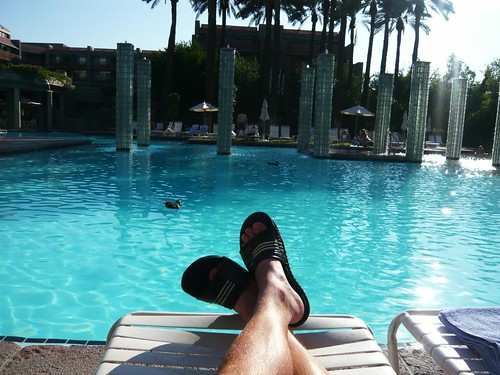 We were saddened by how early the sun was going down now that it was mid September. When it was getting dark, we headed back to the room. Kelly was able to get us a discount at another Hyatt right near the airport. She considered letting us take her car there while she went out, but we thought it would just complicate things for the next day, so we decided against it.

Kelly got ready to go out since she was meeting some friends. Before she left, we went down to the bar to have a drink with her before we said goodbye. At this point, my camera, again, stopped functioning. Are you kidding me, right before the Grand Canyon. Ahhhh!

There was a nice band playing some music down by the bar, and rich people filled the room while Paul and I set in mesh shorts and t-shirts 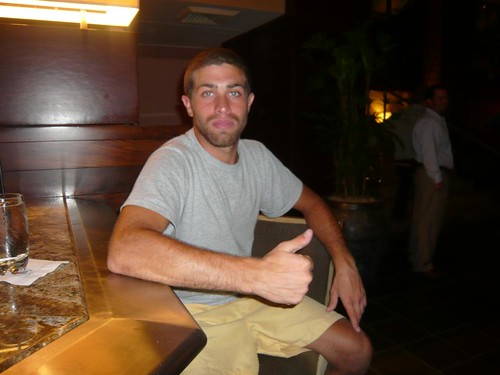 carrying around our remaining panniers in hand. Kelly left (awaiting on pictures from her), and we sat and listened to the band.

Figuring a cab ride would likely run us about $50, we decided to wait for Mark to arrive and pick us up in his rental car. Sorry Mark, but you know I'm cheap. Paul reminded me that Mark's original plan was to pick us up wherever we were, so the next town over wasn't so bad relatively speaking.

Mark gave us a call and there he was out front. I was glad he had made it… a man of his word from about 6 months prior. We GPSed our way to the other Hyatt, and made our way up to our room. It must have felt like 3:30 am for Mark, but he didn't show signs of it. Instead of going straight to bed like I expected us all to do, we stayed up for a while, and watched a stand up Jamie Foxx performance, that Paul and I had become quite familiar with over the past month or so. Mark, who had not known of Foxx's comedic career before his big time acting, enjoyed it thoroughly.

It was fun to enjoy it with him, but did get us all to bed quite late, and we would be up early the next morning so as not to waste Arizona.

What else can I say on this broken record of a blog, but again things worked out. Thanks to Kelly, who was fun to ride with and evidently quite affordable as well. We were excited to end the trip with what would likely be the most spectacular sight we would have seen. Time would tell.