We woke in our serene setting amongst the trees in Big Sur. 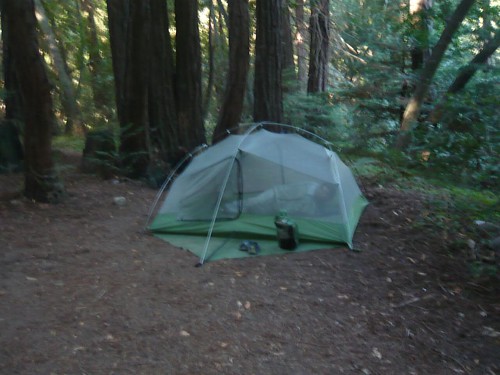 We went down to the campground's general store and picked up some cereal. We ate quickly and got ready to go. As we got on the bikes and began pedaling, I noticed we were at an interesting milestone in terms of mileage within our trip. It took me about 20 takes, but I finally grabbed a good shot, while I was riding. I hope you appreciate it. 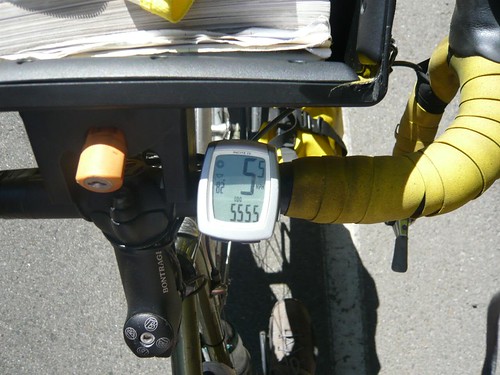 As we ascended along the bluffs of Big Sur, we were in awe at the beauty. Beautiful bright blue water and wonderous wild waves nestled in a little alliteration was the recipe for an amazing ride. 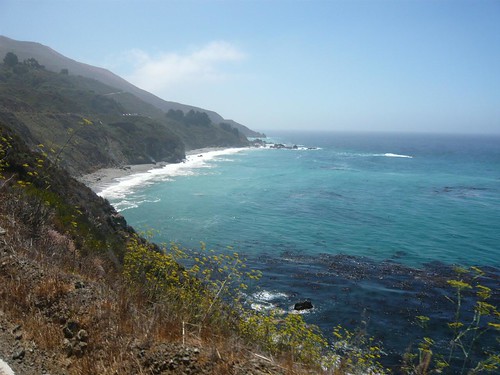 Wow, we were spoiled. Sad to think that many people even living in the United States will never see the ocean let alone a sight like Big Sur.

After the intial climb, we came to a pullout where we saw a woman with a nice camera on a tripod. We got off the bikes out of interest, and as luck would have it, she was observing the California Condors that are native to the area. They are fairly ugly birds, but are cool due to their massive 10 foot wing span! No typo… ten feet, look it up. 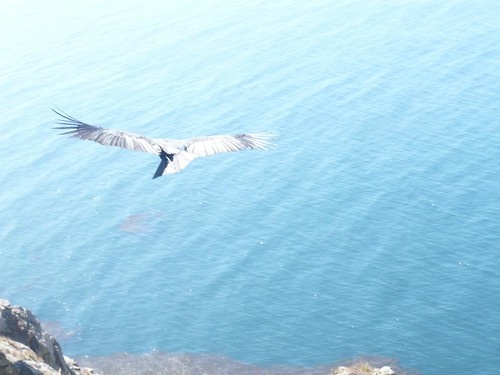 When we were all condored out, we rode more until we hit the small town of Lucia. We had been warned about how Big Sur had been a victim of fires, and was shutdown for a while, and as a result the prices at the stores were extremely high. We were still surprised to see 20 oz. Powerades that were sometimes as little as 80 cents at grocery stores, were $3.50 here. Wow, clearly we weren't going to buy anything. While we were there however, we did run into a distantly familiar face. Sure enough, it was a girl we had met as we were picking up our bikes at the bike shop where we left them in Portland, Oregon nearly a month ago. Lauren had been riding with a friend down the coast, who had since left her. She, another group of bikers and us were all stopped there, and as we groaned at the prices decided to ride to the next town. It couldn't be worse.

We rode the next 11 miles or so of the roller coaster coast we were so used to and arrived in Gorda. There was a general store in Gorda that was much more reasonable where we bought some food, which we enjoyed out in the sun. I pointed out some Half Baked ice cream in the store that Lauren ended up buying. It was a real shame when she couldn't finish it, but me and my chivalrous ways came to the rescue.

We left Gorda heading towards two massive hills according to our Handy dandy Pacific coast riding book. We came to a mutual agreement that Lauren was now allowed into our exclusive club, so we all rode together for the remainder of the day. Lauren proved to be a very strong rider, and was actually able to climb faster than Paul (ha, sorry buddy).

After some riding, we arrived in San Simeon at a general store. There were a couple other tourists there as was noted by the bikes outside. We went in and Lauren immediately began talking to them. The place was shutting down however, so we couldn't get much decent food. Lauren, who had driven the coast before, recalled a Mexican restaurant down the road, so we headed there. We snapped a quick picture out front of the future of transportation 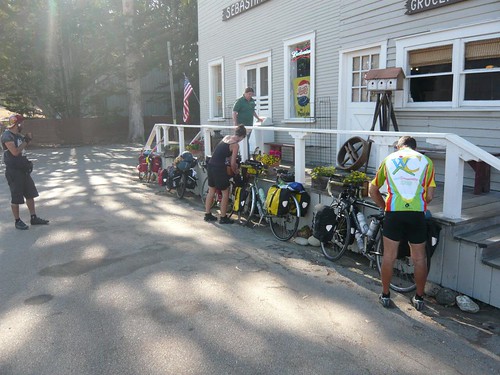 , and headed to the restaurant.

We passed a huge tourist spot of Sea Lion watching along our way with several large buses, and mucho Sea Lions. We pulled into the restaurant and sat on a table in the back overlooking the ocean. It was awesome. Lauren actually ended up eating more than we did at the restaurant. We were shocked. We waddled back to our bikes with our tails between our legs, and proceeded on into the evening feeling like less of a man than I had all trip.

We rode until we hit the town of Cambria. Here we pulled off the 1 through town where Lauren picked up some wine at a liquor store. As we were exiting town, we stopped and tried to help a kid who was walking his bike. We had the tools, but Lauren, the best bike expert on the trip (further emasculating) determined it was not fixable with what we had and we continued out of town.

It began getting dark, so we started looking for places to drop the tent. We were enjoying nice tailwinds and very light traffic so we weren't very picky. As the sun went down, we came upon a few good spots that threatened with large fines for overnight camping. We weren't looking to pick up a fine in California, because we would probably have to actually pay that one. We eventually came upon a path, that led about a quarter mile out to the ocean.

We made our way out to the spot and set up by just putting down floor mat. Lauren insisted we try it as she had sent her tent home a few days ago, and had been just sleeping bagging it. So we did. The sun set 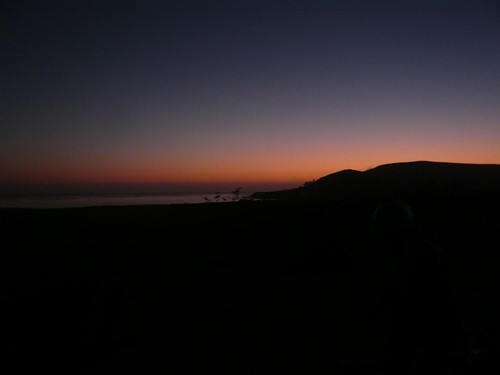 , and since we were a decent ways outside of any heavily settled areas, we saw the most amazing night sky of the entrire trip. We could clearly see arms of the Milky Way, which looked like clouds. We were so amazed, we called a friend from UConn who is getting his Ph.D. in astrophysics. He was glad to have heard from us as we sprung the news on what we had been up to for the past few months.

We talked for a while about whatever as we listened to the waves crash, and gazed into the night sky. It was certainly one of the most memorable nights of the trip.