Marge had a "field trip" with some of her kids to a San Francisco Giants game that the bus was leaving for around 8:30. She was up and out early, so I said goodbye, but we weren't up to take a goodbye picture. She again left us her key to lock up with and slide under the door. Paul and I didn't do much before Henry came to pick us up.

He arrived at 12:45, but we made him wait for a bit as we collected the last of our goods, making sure we didn't leave anything. We hadn't lost anything throughout the whole trip, but somewhere in between Santa Cruz and leaving Fresno to head back, I lost my sunglasses and hands-free earpiece. Damn.

We got in the car with a slightly different mood this time around.   Sidenote– I find even the deserted areas of California to be beautiful. 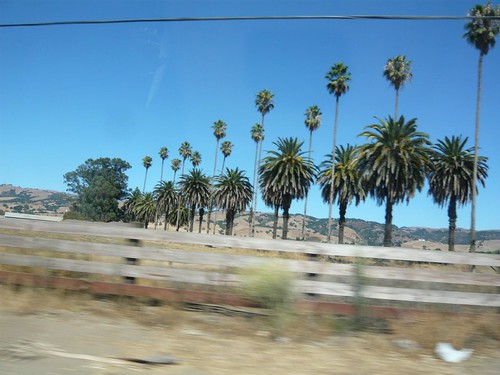 What an amazing state.  return from sidenote — We took the same stop in McDonald's that we did on the way in. I asked Henry what made him decide to stay last minute, and he said he was drinking with friends. I replied, "Oh that's what we were going to be doing to".   We never received an apology or anything from him. That was a little upsetting, so when we got back into San Jose, I decided to include the McDonald's that I bought on the way to Fresno as part of our payment.

No worries, we were back in San Jose, and had to catch a bus back to our bikes in Santa Cruz. Unfortunately we hadn't timed it well, and we would have to wait a little under two hours to catch the next bus. It eventually came, and the only seats available were with the misfits in the back. We were with two older guys who were way too into their music, a drug dealer, and an extremely loud chick on the cell phone. She was hella loud (take that California). Again the driver must have been paid by the mph. Thank god, we couldn't wait to get off that bus.

When we got to Santa Cruz, we made our way to where Mike lived. We said hi to the neighbors, and I went to work putting the other tires on my new rim. It was pretty tough, and made me scared that it was a bigger rim, but I eventually got it on, and everything ran smoothly. It was sick, but I actually missed the bike in Fresno.

We began searching around for places to eat, and get wireless simultaneously. After stopping at a couple cafes, we were told to head downtown to Woodstock pizza, they had good food, and internet access. We hung around there until about 11:00, which was hopping, even on a Sunday night. The pizza was pretty good, and the internet was awesome. I mean, I'm not a nerd.

Around the time we were getting ready to leave it dawned on us we didn't have a place to stay. We started heading south out of town, and came upon a beach. The sand was dry, and the beach was long. There were massive fire pits left with tons of wood burning. However, it was a state beach, and was surely monitored. We would have definitely been kicked off, but it was the campers dream of a spot. We reluctantly decided to move on, after a while of hanging out by the fires.

As we were passing the marina at the southern end of town, Paul saw some grass tucked away behind the parking lot. We found a spot decently well hidden, until morning at least, in between people's yards and the parking lot. After we were all set up inside the tent and comfortable, I realized that I forgot my wallet, computer, and camera, which I normally bring inside. We're both pretty heavy sleepers, so someone could easily steal the stuff, if they were quiet enough. It was one of those things were it wasn't worth me getting up to go get it, but at the same time I probably should have because it bothered me all night as I jumped at any sound nearby.

On the bright side, we had a good place to sleep, and the next day we were heading towards Big Sur, one of the most majestic places along the Pacific coast.