I woke around 8 to the good news that Ian's suitcase was in at REI. That means we would open the store up at 10:00 to get it; Ian would have it no other way. Eileen made us some chocolate chip pancakes before we left. Yum.

We got to REI a few minutes after it opened… it would have to do. Ian is a big fan of REI, he recently got a knife from them that he was particularly fond of, and know it could easily be stored safely in his camouflage duffel bag/suitcase. It was a win win. I also picked up a box of Clif bars since they were nice and cheap. Nolan repeatedly honked the horns on the bikes; there is something for everyone at REI.

We left and headed back to the house. Ian and Grace had to be dropped off at a friend's house, so Eileen left Nolan with us. Paul and I had a catch while Nolan played with a few of his thousands of toys. We went back inside and I wrote a blog that took a long time.

By the time I was done, Eileen was ready to pick the kids back up, so Paul and I rode our bikes down to an In-n-out burger. On the way, we saw a large pickup game of soccer that I hoped would not be over by the time we got back. I considered skipping lunch, but I don't think Paul would have been happy about that as it was his first time having it. For those of you easterners who don't know, in-n-out is a delicious fast food joint that makes amazing burgers, fries, and shakes. Animal style, which does not appear on the menu, is a must. It's basically a large unhealthy goop of heaven/mystery sauce on your fries and burger. I have had it before, and now In-n-out had a new fan to add to the base. 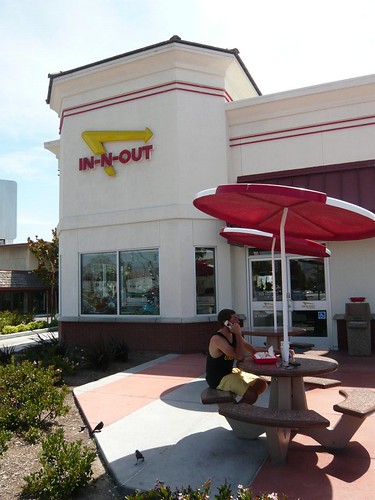 On the way home, much to my chagrin, the soccer game was over. There were a few remaining guys hanging out, and I asked them when they would play again. He told me they play Monday through Friday starting around noon. Nice that they have that time, but hey it was soccer, I was happy. We would be back tomorrow.

We returned to the house to hang with Eileen and the kids. Grace and Paul jammed on the keyboard 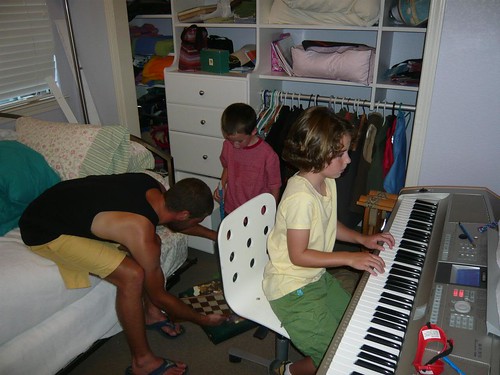 for a while before our adult duties had to be taken care of.  Boohoo.

We were in charge of getting some goods for dinner at Trader Joe's so Nolan and Grace came with us to show us the way. When we got there, we found out the real reason they came. They wanted to find Henrietta, a stuffed animal, within the store to get a free prize. They were successful, and ended up getting some lollipops for their efforts. When we left, I delegated duties as I saw fit. Nolan seemed to be best fit for carrying the milk. 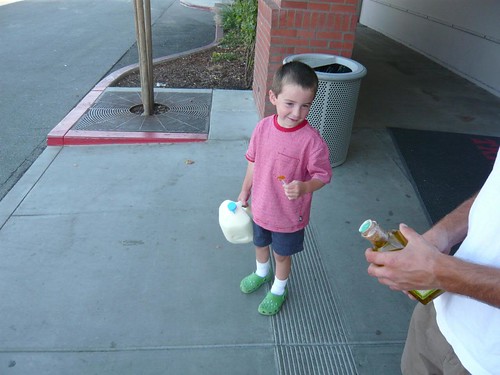 Amazingly enough, after I thought I picked the best man for the job, he ended up dropping the milk which we would have to put in a different container when we got home. Grace did a better job with the olive oil, and milk after Nolan gave up.

We came back home, and shortly after John arrived. He brought Grace to her soccer practice, while Eileen got dinner going. Paul played the ever challenging game of Jenga with Nolan 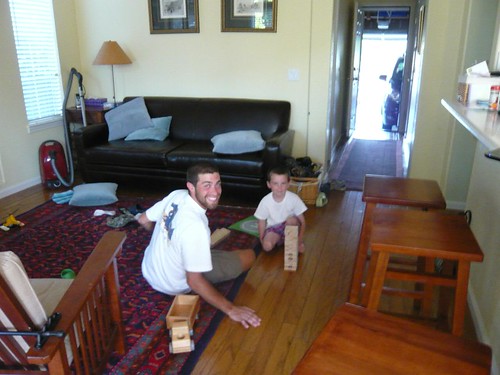 , while the adults prepared the food. I think someone forgot to tell Nolan the point of the game was to keep the blocks off the ground. Oh well. I was responsible for some zucchini dish, so I looked up some recipe online and went to town. 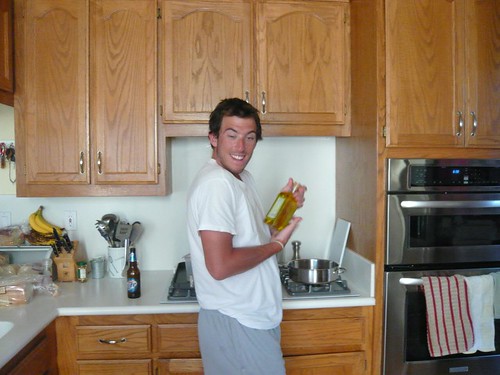 (didn't even know she had the camera… it's how i prepare all meals). I would be lying if I said it wasn't the best dish amongst the grilled veggies, kabobs, and San Francisco sour dough bread. Wink wink.  Dinner was another hit for supermom, who was gaining a respect for our eating ability as we polished off plate after plate.

After dinner we watched more olympics and skyped with the Cegs again. In the break of some olympic action I was actually able to capture this candid photo unbeknownst to the person who appears in it. 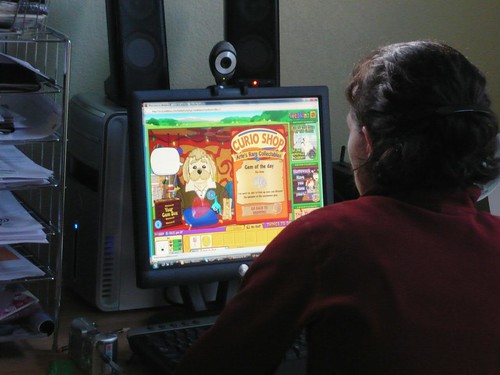 Yep, that's Eileen playing webkins while no one else is around.  Not a kid in sight.  She claims her sister Anne Marie likes it as well, but I think she just said that because she's a doctor and it would make her look less pathetic  Either way, what a relaxing stay at the Hosbeins. It was too bad that we would be leaving the following day, but such is the life of traveling men.

We wouldn't rush out the next day however; we would stick around at least for the soccer match. For now it was bed time… in a bed of all places. Lovely.