When we got up, we decided we were going to climb all the way over Leggett before stopping for food. There were two hills to Leggett. After we passed the first, there was a sign that said there were no services for a 27 miles. We had already gone 18.  There also was a “you forgot your school lunch boys” sign as well 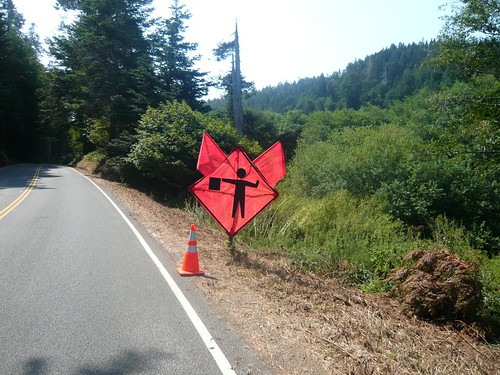 .  Not sure how often that is necessary, but lucky for those boys who weren't going hungry today  Anyway… The second hill of Leggett was much steeper and seemingly endless. The descent down the hill was fun and very windy through a dense forest. It leveled off for a while, and then we hit the coast. For the next 10 miles or so until we hit Westport, we rode along beautiful bluffs. 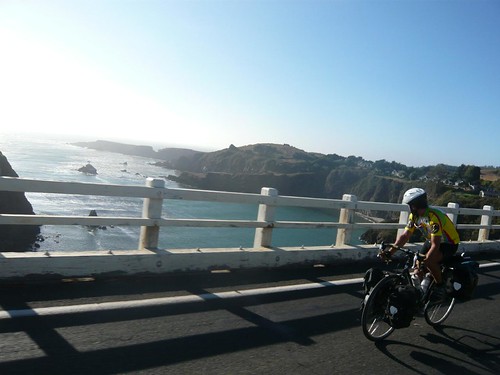 This was the most picturesque part of our California ride SO FAR.

By the time we hit the market in Westport we had gone 45 miles. We were due for a nice long stop. Fortunately the lazy workers at the store felt the same way and took about 30 minutes to make a couple of sandwiches for us. We also got some cereal and milk and spilled some to the pleasant surprise of the canine workers at the store. We relaxed outside for a while, while eating our food and people watching. Not the best in the brightest in Westport I must say, not like the Connecticut version (when I was there at least).

When we finally left Westport, we figured we would do another long ride to Mendocino. We had magnificent tailwinds that helped push us along the way. More beautiful scenery lined our trip to Mendocino, and we again stopped at a market when we got there. More and more hippies populated this town as well. Much of northern California, or norCal if you wear your sunglasses backwards on your head when they aren't protecting your eyes, seemed very hippy/laid back. Apparently they grow a lot of this substance known as Marijuana; maybe that has something to do with it as well.

After we fueled up, we skipped town heading for Manchester, which would make a century (100 miles) for us that day. When we arrived in Manchester, we found nothing there, so we continued on to the next town called Point Arena. There was a small Mexican joint in Point Arena that we stopped at. The odometer read 103.1; it was time for some food.

After we filled up there, we stepped outside and began of thinking of a place to sleep. The winds were strong heading south, and the near full moon lit up the ground well. We got back on the bikes and took advantage of our favorable conditions. While we were riding, we nearly hit a deer that was crossing the road. Shortly after that we saw the most amazing, and enduring shooting star either of us had ever seen. The lack of light pollution helped make the sky shimmer extra bright. It was a very enjoyable ride, but a little tough for me without a headlight.

We decided to stop at a very small nook near some restaurants, right past a campground where normal people might stop. It was a great spot, elevated right near the ocean where we could hear sea lions and waves crashing for much of the night. We had done nearly 120 miles and would have breakfast right near the tent in the morning.