I woke up and saw the other two groups of bikers off while writing and conversing with them. When Paul got up, we packed up and got ready to go. I got us some tea from a little hut in the campgrounds to warm us on the cool dreary morning.

We left the campgrounds and headed to a small town called Yachats. It was a fairly flat stretch of the Oregon coast so we made great time. When we arrived we looked at the map I got at the tourist center in Astoria which had topographical information. Sure enough, we had just rode undoubtedly the flattest area of the coast in Oregon; the rest of the state would be far hillier. In all, the map claimed there would be 16,000 feet of climbing and descent in Oregon.

In Yachats, I bought a gallon of chocolate milk and some bananas, and took it across the street where Paul went to grab a sandwich. They had wireless and outlets again at this place, and again with the crummy weather we were more sluggish and willing to hang around inside. For the second day in a row it was at about 2 that we left our first stop.

Our next stop would be in Florence, which was about another 25 miles. Mandy (Eugene) had told us to stop at Mo's for their clam chowder, so we did. It was rather delicious… a good call by Mandy.

We kept on trucking through the crappy weather after Florence for another 25 miles to Reedsport. We stopped at a Safeway grocer, and got some Half Baked ice cream. It was fairly cold out, so we sought shelter inside a Subway. When we sat down and began eating, a manager came over, and asked us if we would be buying anything. When we said no, we were all set, she gasped as if we threatened to murder her family. A few minutes later, after we saw her get off the phone, she came over and told us we would have to leave since we were violating a health code by bringing our own food into the store. Part of me really wanted to go off on her, but she was clearly not worth it. Next time you guys are in Reedsport, Oregon, do not give the Subway any of your business. At any rate, we cooperated and sat out front finishing up our stuff.

After we were done, we headed back into Safeway to warm up. Here we were in early August, probably the warmest time of the year, and we found ourselves warming up in a grocery store. We marked off the Oregon coast as somewhere we would not choose to live after the trip. I think we were just a bit sick of the sunless, dreary weather.

We left Reedsport, looking to cover a few more miles bringing us into Winchester Bay. Once we got into the area, we had a tough time locating the hiker biker campgrounds. There were tons of Rvs everywhere, but no tents in sight. We did however find a nice stretch of beach that would be free to sleep on. There was a nice drop off from the road that would provide good coverage in terms of visibility. We finally were crashing on the beach, although it wasn't the ocean. 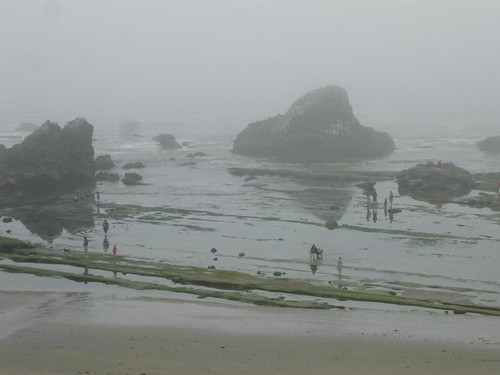 We setup the tent and didn't even use our pads because the sand was so malleable, and comfortable.

Once inside Paul began creating a drawing on a postcard that he was sending to a friend. To this day, I don't know who it was, but I always joke that it's one of his 5 boyfriends that always call him while we're on the road. If you were the recipient let me know so I can make fun of him. Thanks.

We saw more beauty again today shrouded in a haze that lasted the whole day. Waa waa waa about the weather, I know, but we were so spoiled with sun throughout the trip we missed it. However, we were sleeping on a lovely, soft sandy spot and weren't paying for it. Hopefully the cops wouldn't wake us at 3:00, but only time would tell.