I woke up when Christie returned with her walk with the dogs Caya and Frank. Katie shortly after returned from a morning run. Christie began preparing huckleberry pancakes, what she called a local special. By the time they were ready, Paul made his way downstairs and the boys were all at the table for "the last meal".

It was another great one. We conversed in the kitchen again for a while, and at one point I snuck out and climbed upstairs to nerd it up on the computer. We still didn't have a plan of how we were getting to the Seattle area from Spokane, although Katie and her sister had just done it a few weeks before us.

Mark planned on making his way down to the local bike shop at 10:00 to drop off the bike for shipping home. After that Christie would bring him to the airport and they would ship him back to Bristol, CT or at least Windsor Locks.

When the time came, Paul and I decided to bike down with him to the bike shop, he'd need my navigation abilities anyhow ;O Mark said his goodbyes, and we said a maybe goodbye to Katie who wouldn't be staying the night. We took the picture then 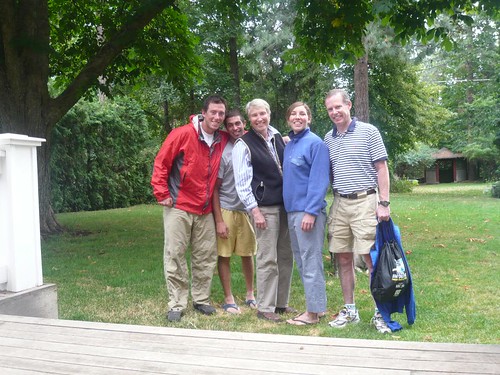 and headed down towards the shop about 1 mile away.

At the shop Paul and I pumped up our tires in preparation as our tour was far from over, and Mark made the necessary arrangements to ship his bike off, no doubt not as concerned with its prompt delivery this time around.

We all wept for a good half hour as we maintained a strong three man group hug. It was a hell of a week. Mark certainly did not choose an easy one, although as he said it was more timing than anything. His vacation in the Cape in a few weeks would likely be a bit more relaxing. Christie showed up to cart Mark off and we paused for one last photo op. Kaching. 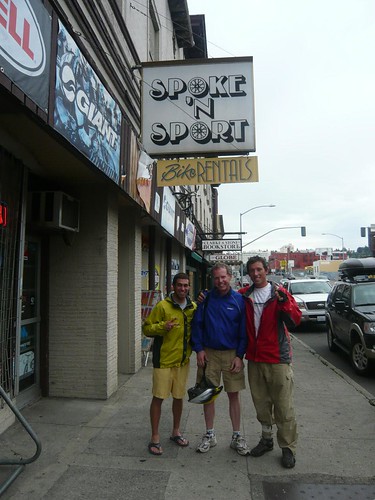 So long Marco Polo, it was a pleasure riding with you. Catch you on the flip side.

After we parted ways with the man, the myth, the legend, we made our way to a downtown sports store. We were in search of a soccer ball, and a soccer ball we found. Inspired by Evan and Ever from Glacier, we picked up a ball and pump and were eager to test them out. I tried a shameless attempt at getting a discount on one of the items as the packaging was opened, but to no avail.

We left there disgruntled, eager to play, and hungry. We dealt with the hunger first, figuring the disgruntledness would wear off, and the day was nice enough that we had the rest of it to play. We got some quick food and were ready to pump up the ball and kick around. We first went through this park which was on the south side of Gonzaga, and then remembered the nets and field we saw at the university on the way in the day before. We made our way over to the fields that had some available nets that would be fun for hours. 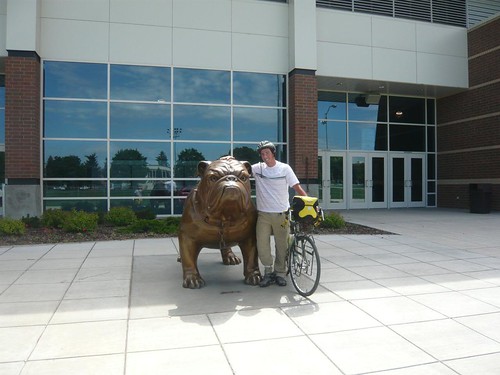 We spent a long time kicking around hoping to attract some people to join in on a game, but as school was not in, the people were there mostly for basketball camps and the like. It was fun either way, and we were quite satisfied with the decision to buy.

After the two man game's fun wore thin, we headed back to the Querna's. On the way over we saw a few people kicking around on the actual fields that the ‘Zags play at. They were actually on their d-1 team, and hence preTTy preTTy good. We were hoping there would be some sort of pickup game in the area, but they were just planning on shooting on their goalie later on. Oh well. If someone were to make a website where people could find out things like this…. Hmmm, only if.

We biked back up to the Querna's, whose house rested on top of Mt. Everest, which oddly enough is in Spokane Washington, contrary to popular facts. Katie had fortunately not left yet, so I had a chance to pick her mind quickly on their route to Seattle. She explained how some parts were a bit like the moon, and others were quite nice. It did mean one more challenging pass, but she assured that it was an easy one. She also mentioned that she liked to be lied to while riding to keep her spirits up, so we considered she may be doing the same for us. Ha. Either way, it seemed like the best plan, so we stuck to it.

We said our final goodbye to Katie, as she departed for Priest Lake in northern Idaho with some friends. After Katie left, we chatted with her mother who had some ideas about us traversing the islands of Northwestern Washington. We had been told by Jeff and his family about a jazz festival in the San Juan Islands, but they were a bit more north of where we wanted to go. After some searching, and Christie making a phone call to some friends who live on the San Juans, we couldn't find anything jamon it, so we decided against traveling up to them. It also would put us in a crunch for time to meet Meghan in Portland, Oregon in a week. Instead Christie thought a ferry onto Whidbey island, and a ferry off of it to the west into Port Townsend would be a nice ride. We agreed, and decided to do it as well. Once again, our hosts had determined our riding future.

Christie headed out for a school board meeting and left the boys all alone in the house. They insisted that we act is if it were our house and to help ourselves to anything. We felt like relaxing, so we put in a movie. This time it was about this guy who moved to Alaska where he built all his own stuff, including his house with some tools. No electricity. In the wild. It was pretty interesting, but this guy was all alone for 35 years. It was a bit much for my liking, but amazing that he survived the frigid winters up to his 80's.

After the movie was over, Kit returned from work. It would be a man's dinner tonight, hence very simple. Kit grilled up some brats and burgers and we ate them. Novel, eh? They were good. Christie came back after Kit went up to bed (he gets up for work at 3) and we talked with her for a while.

Once the food had settled, we kicked the ball around in the backyard. We said goodbye and thanks to Christie in case we didn't get up before she left the following morning. When we finished with soccer we went inside and put in a classic, VHS style: Ace Ventura: Pet Detective. That was Jim Carrey's first big film from 1994, where he was ONLY paid $350,000 for his role. Crazy.

We repeated the routine of the night before and fell asleep towards the end. When it was over, we headed upstairs for beddy bye. We'd be back on the bikes the next day heading for the ocean.