The unfamiliar site of an empty tent scared me. Paul got up first? This was the first time in the trip this had happened. Paul gets on average about 2 more hours of a sleep each night, so I was quite shocked. He really enjoyed the showers there (he's much more into that thing than I), so he took a long one to start off the morning.

As we were packing up, the Ball's came over to give us a couple more soda's and tell us how much they enjoyed spending time with us. We realized that we were definitely giving people something, even if just conversation. As we said our 10,000th thank you of the trip, they acted as if we were the ones doing them the favors.

When we made it the front office to pay for our second night, the attendant there said it was "all right" and sent us on our way. This state park seemed as magical as Disney to us, and a hell of a lot cheaper (sort of… thanks Mark). Long live the D'arbonne.

We did the usual stuff where the riding was concerned. Broke up the day with 15-30 miles stops where we'd fill up, including another Sonic smoothie, and more online time at Mickey D's. We would be exiting Louisiana into Arkansas, and were excited about that, our 5th state.

Springhill, where we'd say our goodbyes to Louisiana, turned out to be a very cool town. We were fortunate enough to pass a visitor center, that was OPEN this time, and stepped in. We were immediately greeted with cold water and a nice woman eager to help with our travels. As she had a ribbon cutting downtown in a few minutes, she had passed us on to the other worker in the office, Jan. Jan, turns out, is a saint… with connections. Although there was lodging in Springhill, we really wanted to make it into Arkansas that evening to reach mileage goals that we had. Jan had a certain person in mind that would be able to help us out who lived in Bradley, Arkansas, 15 miles away. Jan was unable to find his number however, so what did she do? She found a Bradley phone book and called any old number asking how she could find this man (Jim). Sure enough, the first person was able to get us a number. We didn't speak to Jim, but rather someone who helped with the parks that told us we could set up our tent that evening. We were all set.

With the good news, we decided to eat in downtown Springhill, as we had enough light to get us to Bradley after eating. Taking Jan's advice, the person responsible for much of the restoration of the downtown, we ate at a place called soups and scoops. She recommended we go there because the owner Christine was an interesting woman, and the food was good. Both proved to be true. We had spoken to Christine's daughter who's name escapes me for a while. She was living in New Jersey, and visiting to help her mom. The mother showed up later with Christine's baby, and it happened to be her other daughter Amy's 21st birthday. The whole clan ended up showing up, and invited us for cake, to which we had to turn down for safety's sake in making it to Bradley before darkness. Although we immediately regretted our decision (much like Ron Burgundy) after leaving, it would prove to be the smartest thing we had done yet.

When we left, it was calm. After a few minutes a slight rain had begun. It was actually quite refreshing in the heat, and we welcomed it. As we continued to travel, the clouds began to look more menacing. Brrr… a cool breeze. Wait a minute, there was a bad concoction brewing. As we came to a clearing, we looked up at some ugly, ugly clouds. The winds had picked up quite a bit, but the rain had subsided. Looking what seemed to be directly overhead, Paul and I both saw swirling clouds. Insert repetitive expletives. We were under what we thought could be a tornado. I was considering ducking into the woods (probably not a good idea), while Paul thought we might be able to elude it. We went with his idea, and pedaled like we never had before. The wind was blowing us a bit side to side, and at one point, we weren't even moving. Things slowly got better as we kept pedaling, such that I was comfortable enough to take out the camera and start shooting footage.

We made it into town unscathed, and had to hide out at a gas station while the storm subsided. The sky really opened up, and the attendant told us that there were tornado warnings in the area. Lesson learned, we would be like hawks on the weather reports looking forward, with the realization of how quickly a seemingly tame situation could turn life-threatening (not that ours was by any stretch). We called Richard, our contact in Bradley, and spoke to his wife. She told us how to get to the park, but with the rain coming down in buckets, it wasn't the first thing on our list. A police officer had rolled in, and noticed our desperate situation. We spoke to him for a bit, and he had us sit tight, as he did another round.

Upon his return, he had secured us a spot at a fire station down the road. Showers and a.c. free of charge. Awesome. Once the rain died, he showed us over to the station. There were some cookies and sodas in the fridge. We were free to use whatever we needed including all the food they had. It was a volunteer place, so no one else was there. It was ours.

There was a meeting room in the building as well, where they had some sort of town meetings. Paul and I decided to take some pictures in some fire gear, as well as act out a scene at the meeting table. We were just having fun, but stayed up way too late. 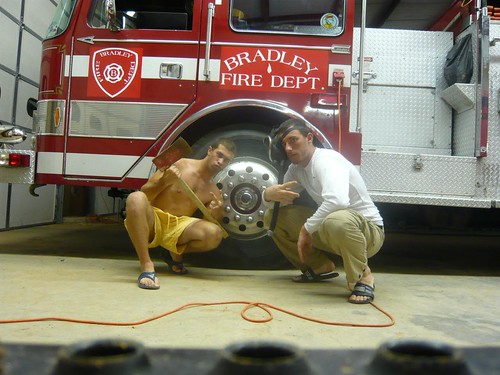 Again, we had a free, safe place to stay. On top of which, we were still alive! Great success.