After rising and packing up we left the campgrounds, not yet having paid. The Ned Flanders in me turned us to the front desk to let them know that we had come in after dark and could maybe settle up. The ever so kind woman at the front made us pay the full fare (nearly). I asked if this called for a "good samaritan" discount to which she kindly obliged and knocked a whopping 10% off. We still ended up paying over $25 to put our tent down for a few hours. Either way, much cheaper than a motel, so we're still doing all right.

We left there and headed for the Florida caverns. It was about 7 miles to the caverns, and we passed the blue springs rd on the way. It would be tough to backtrack on such a long day, but well worth it to dip in the cool completely blue, drinkable springs. We arrived at the caverns within 5 minutes of a tour departure. This was helpful because we wanted to make good time because we had about 100 miles worth of biking ahead of us to reach Grayton beach state park on the beautiful gulf coast.

The caves were truly amazing. See the pictures 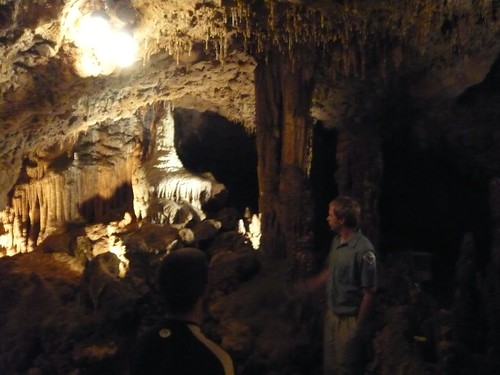 . As an experienced spelunker, having visited caves in multiple countries (one other in Ireland a few months ago), I was impressed with some of the formations. They have a name for each little room depending on the formations, and told us cool stories about the cave diggers. It was a nice refreshing 68 degrees inside, which is constant year round.

After exiting the cave we were greeted with some bad news; the springs would not be opened for visiting until the following day. I was really upset, but for some reason Paul got over the idea of not backtracking rather quickly.

We continued heading southwest for the coast. Along the way we were chased by dogs on a few occasions, along their respective owners' yards. Dogs seem to love us passing by, but they can be a bit scary, depending on size and willingness to leave the yard. Gary Speary, on of our first hosts in Sebring, FL had to get surgery on his collarbone from a dog running out in front of him on one of his tours. I have since been riding with the mace in the front pouch ready for the pooches.

Stopping for lunch, we ate at a nice little diner in quite a "country" part of Florida. I was pretty excited to see that I could substitute corn bread for my french fries as a side with my burger. The waitress must have mistaken my saying cornbread with "fried up ball of grease". Pretty disappointing, especially when the waitress brought out Paul's gallon of fries for his side, realizing what I was missing out on. I guess cornbread is not universal for delicious, sweet bread as I once thought it was.

As we continued towards the gulf coast, the winds began to pick up from the water. The trek down to the gulf was pretty tiresome, but worth it once we arrived. The beaches on the gulf are beautiful, and it was a nice ride to the campsite. We were so tired, and enjoying the ride so much that we forgot to stop at the city (Sunnyside) where the Truman show (with Jim Carey) was shot.

Arriving at the campground nearing dusk, we were relieved to hear that although they didn't have any traditional campsites open they would stick us in this hidden part and charge us half price, since we clearly were quite tired having ridden 100+ miles. Sweet.

Complete with appetites of two men each, we showered up, and headed into the little touristy section with food and bars and stuff. It was a really cool, small town area with little shops and a few nice places to eat. In fact, one place was so nice, that although we were let in the door, once we looked at the numbers next to the dollar signs on the menu, we decided in probably wasn't for us. Pretty embarrassing, but actually quite funny.

After finding a reasonably priced establishment, we ate there and I headed to starbucks, where I was able to get online, while Paul pursued a bartender we met. Paul was working on his courting skills, while I worked on my nerd skills. So far I'm winning. Would he be successful, returning with a number… something? Yes, he was! Although the girl had just moved to the area with her boyfriend (bummer), they were willing to give us two full racks of ribs! 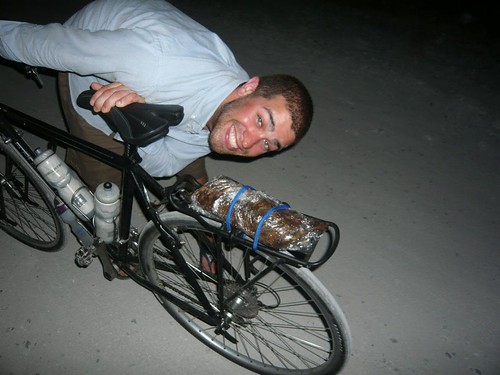 . What a catch. These would have been nice a few hours before, when we were hungry… sadly they ended up going to waste, but a small triumph nonetheless with Paul facing his fears.

We headed back into the campgrounds in complete darkness. We could not see 5 feet ahead of us. After eventually making it into our site safely, I dozed off quickly. Being that the only barrier between us and a lake with alligators in it were some shrubs, I naturely began dreaming about alligators charging the tent. At the moment the alligator was about to reach us I received a text message, which gives a nice, loud alert. The phone was about two inches from my ear so I sprang into the air, surprising Paul a bit as he was writing in his journal. My bad dude…. We were both still alive.